ge·net·ic en·gi·neer·ing noun: the science of making changes to the genes of a plant or animal to produce a desired result.

I was born and raised on a farm in a small town. The first time I ever really learned about GE/GMOs was in my high school Plant Science class. I was rather surprised. Before this I thought food was food, and I never really worried about what I ate. However, after learning about GMOs I became more aware of food labeling. To this day, I still struggle with understanding what the war on GMOs is really all about.

The world’s increasing population means that starvation and poverty rates are on the rise as well. According to the USDA, roughly 14% of households in America had food insecurity in 2014—5.6% of those had very low food security.  In 1980 GMOs were approved for patenting by the United States Supreme Court and in 1995 the EPA approved the first insecticide-producing crop. According to the USDA, in 1995 overall hunger insecurity was at 12%, but has continued on an upward trend through 2013. There is no doubt in my mind that GMOs hold a great potential to help the current, and future, generations with food security. 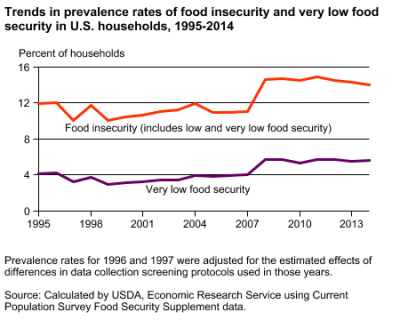 One of my main concerns with GMOs is the obvious hesitation to label them. When I go to the grocery store I notice that foods are labeled as non-GMO, yet there appears to be little labeling of foods made with GMOs. My question is this: If GMOs are safe, why are companies so hesitant to label their foods? As a consumer, I would still buy the product whether it be GMO or not, but I firmly believe that people should have the choice as to what they are putting in their bodies.

I find that at this point we are focusing on the wrong things. There are people starving all over the world, and so far GMOs have been proven safe for human consumption. According to the USDA’s data, roughly 97% of HT soybeans and more than 80% of HT/Bt cotton and HT/Bt corn were being genetically engineered in 2014. GMO’s are prevalent in our society today, and it’s something that we aren’t going to be able to get rid of.

Another concern is the chance that these crops could be harmful to the environment. Most scientists say that no, they will not harm our environment, though there is no certainty. Farmers are planting millions of acres of GE crops while scientists continue to argue about their ecological effects. Many scientists are worried about the effects Bt corn may have on insects. Bt delta endotoxin is a protein that effectively kills off Lepidoptera larvae, more commonly referred to as caterpillars. One concern with the Bt protein is the development of resistance in both the caterpillars and harmful plants. Though precautionary measures are taken to prevent mating of caterpillars who’ve ingested the Bt corn, there is no certainty that they won’t. If weeds find a resistance to the Bt protein as well, they can take over farmland and become nearly impossible to control.

Genetic engineering is a touchy subject in the world today. Farmers who plant GMOs are deemed monsters, and those who choose not to take huge crop losses year after year. We are in a nationwide food fight, and no one seems to have an answer. There seems to be no correct answer, as many companies refuse to label their foods as being made with GMOs. It should as simple as labeling the food and giving people the option to eat GMOs or not, so why isn’t it? Is there something we aren’t being told? Or are companies afraid of taking money losses if they begin labeling their foods? How bad could the environmental impact truly be?